You have kids to take care of, you have people you owe money” Tacha hits back at Ubi Franklin following his live interviews with Mercy and Teebillz

Tacha has called out Ubi Franklin for the Instagram Live interview he did with Mercy where he stated that one person he didn’t want to see in the Big Brother Naija house was Tacha.

Ubi said during the interview that Tacha had once sent him DM begging him to help her with his connections so she could get into Big Brother house. He said he told her he didn’t have such connections and after that, she began doing videos to insult him online.

Ubi didn’t end there. He had another Instagram Live interview with Tacha’s former manager Teebillz and during the interview, Ubi said that he got Teebillz endorsement deals for Tacha.

Tacha hit back in an Instagram Live video of her own.

In the video, she had on a crown then took off the crown to insult Ubi, before wearing the crown back.

She said in the video that she has turned down numerous deals and Ubi can’t claim he got her deals.

She then went on call out Ubi, saying: “Ubi Franklin, you have kids to take care of, you have people you owe money. Are you done focusing on that?”

She added: “The nerve, the effrontery for you to actually say, ‘if there’s one person I didn’t want to see in the Big Brother house, it’s Tacha’. Who are you? Are you my God? Are you God? Who exactly are you to make a statement like that.”

“I know, I understand, this whole thing, like when you’re irrelevant, you want to just try to suck out of someone’s relevance… And I get you and I know you’re happy because this ten minutes of fame now, you’d use it, you’d try to exhaust it because that’s what you do. You’re an opportunist. But please, in all of the lies that you tell, do not, I repeat, do not open your mouth to say that you got Tacha deals because you got Tacha absolutely nothing.

“I have never met you before, I sent you a DM once, and like I said, it was a business proposal, you take it or you leave it, and you left it and that’s it.”

She then accused Ubi of trying to pit her and former Big Brother Naija housemate, Mercy, against each other.

Tacha also showed gratitude to Teebillz for standing up for her during his interview with Ubi.

In the live interview, Teebillz bluntly told Ubi that he “f***ed up” and that he was “a bit disappointed” in him. Also, when Ubi didn’t want to call Tacha’s name and called her a “talent”, Teebillz insisted on calling her name.

Ubi said to Teebillz: “You remember when I called you after you signed that talent?”

Teebillz responded, stating that he has worked with many talents and asked Ubi to name the “talent”.

He added: “Her name is not ‘that talent’ call her by her name.”

She wrote: “My hard work got me where I am! My sweats speaks for me.” 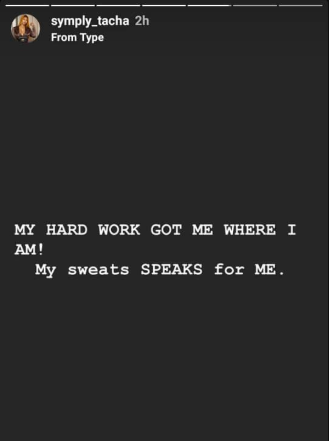 She added: “They expected to see a broken Tacha. I’m sorry you moron!!! You are not God.”

Thanks For Reading. Please Share With Friends And Family

Another Nigerian man dies of Coronvirus in the UK

You’re a great example to many says Hon. Etaba as he celebrates Hon. Chris Njah

School Of Nursing Itigidi Upgrades To College As Deputy Gov. Welcomes Nursing and Midwifery Council of Nigeria To Cross River State for Retreat

UN YouthSpeak:Young Population, A Strength For Leadership and Development In Nigeria – Betta Edu